Skopelos is the second largest island of the Northern Sporades. It is considered the greenest island of the Aegean as it is covered in thick forest. The island offers descent tourist infrastructure and has managed to maintain its traditional character throughout the years.

The Town (or “Chora”) of Skopelos is a traditional island town with distinctive architecture and picturesque cobblestone alleys. It has been declared as a traditional settlement. The Town along with the entire island boasts many old traditional churches, chapels and monasteries. There are 24 monasteries, in total.

The north and east coasts of Skopelos are rocky, while on the south and west there are numerous slopes which form the astonishing green beaches of the island. Most of the beaches are located in the southern side of the island: Stafilos, Velanio, Agnondas, Limnonari, Panormos, Andrines, Milia, Kastani, Elios, Armenopetra, Agios Ioannis in Kastri and many others, surrounded by stunning pine forests.

It is reported that, during ancient times, Skopelos was inhabited by Cretans whose leader was Stafylos, the son of Ariadne. The island was known as Peparithos and was renowned for its wine (Peparithios wine). At the village of Stafylos one can find an imposing Mycenaean tomb which stands even to this day, while on the eastern side of the Town tourists may visit the Asklepieion of Skopelos. 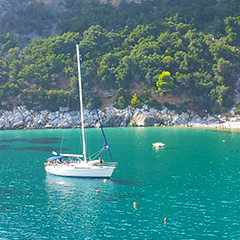 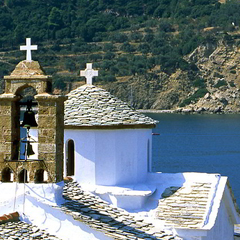 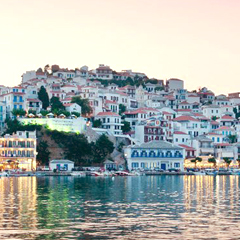 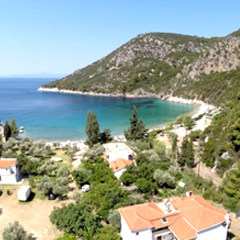